It seems like every where I turn the last couple of weeks, someone is preparing chicken this way. Also note, I coined this name myself because I find it to be fitting and jazzy - so if you're having a glass of wine with the girls and you mention bistro-cut chicken - don't hold it against them if they have no idea what you're talking about..

There of course are reasons that I find this technique to be so exciting. The first and foremost reason is that the chicken cooks in no time. And it cooks quickly without having to take the effort to flatten each breast. And the second reason, you get to enjoy four seasoned sides instead of two..!

When I was at the store, there was a sale on family-sized packs of chicken breasts. What a gift of time it is to cook up pounds of chicken and then have it on hand for dinners and lunches later on. I kept enough for a couple days worth of meals in the refrigerator and wrapped the remaining and placed in the freezer.

To prepare, all that you have to do is slice each chicken breast in half lengthwise (sort of like you are opening it like a book). Then pat dry with paper towels (this will give you a better crust when it cooks). I seasoned mine very well with McCormick's Moroccan Seasoning (a fantastic blend of cinnamon, cumin, coriander, ginger and cardamom) and a sprinkle of kosher salt.

Preheat a skillet over medium heat with a tablespoon of olive oil and butter. Cook the chicken halves for 2-3 minutes on each side or until no pink remains. 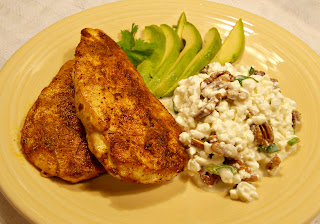 And because I was missing my mom (just a little bit), I made one of her salad dittys that I always enjoyed. Along with some avocado slices, it was a nice little dinner. Tip - if your knife and cutting board were used previously to prepare the chicken, just slice up the onions using kitchen scissors.

Combine all ingredients. That's it.