Today, I just have some food thoughts on my mind.. First off, the following picture is from last summer when we came across a hot dog truck at the Miller Brewery. The makings of summer perfection, Miller Valley and a hot and snappy hot dog.
﻿
Secondly, for Easter breakfast I whipped up the best waffles that I have ever made and also the best waffles that have ever ﻿met my fork. Find them here: Belgian Waffles A couple of my notes, I used 2 teaspoons of sugar instead of 1 which is probably neither here nor there, but just in case you want to achieve my results.. I also tossed sliced strawberries with pure maple syrup to serve with them. Sadly, a rare occurrence in my kitchen, I didn't have any whipped cream on hand. The waffles were still dreamy, but whipped cream would have knocked my socks off.
Thirdly, I still often dream of the below meal. It's a burger that I had in Luzern, Switzerland. The burger was wonderful and I think it cost about $15 U.S. But notice the coolest part, it came with a piles of shoestring fries, beet relish, corn, shredded carrots, a cucumber salad and a lettuce salad. My main item was accompanied by six vegetable items (counting the french fries..). That's just absolutely remarkable so I thought I would share just how remarkable it was. 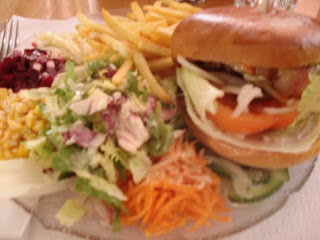 And fourthly, there is a list going around on facebook that has peaked my interest. The curiosity of culinary adventures is so exciting and trying something new can happen right in your current path. Whenever, the opportunity strikes, take it! While in Boston last week, I stumbled upon my first cluster of food trucks! I've been waiting and waiting for this moment. I did have a food truck cupcake which was super fun. There was also a Banh Mi food truck, regrettably, I did not have one. But was still excited to be in it's presence.

Why didn't I have a Banh Mi, because we were in route to have a Lobster Roll at the Barking Crab. Oh my goodness, I learned that I really, really love lobster Rolls. It cost me $18 (yes, for a sandwich). Plus another $2 for an upgrade to sweet potato fries (which were steak cut and creamy on the inside, yum). But gosh, it was exquisite. Now, on my to-do list, I would like to get a lobster roll at a not so trendy place where the locals eat in the under $10 range, because, like most local joints, I bet that would be super top notch.

And why do I not feel too guilty about passing up a Banh Mi? Because in my everyday life, I'm close to a shop that sells Banh Mi and a visit there is also on my to-do list.

I did mention that this post was called 100 things right? ha But I've been quiet for quite a while lately, and now I have a lot of things to discuss.. Back to the facebook list, I've tried 67 of the items. How about you? I would like to use the below list as a bucket list, but a couple of the remaining items, I have absolutely no interest in.. I was sad to see that brains were not on the list, my great-grandma used to make us pork brains and scrambled eggs for breakfast. My sister and I thought that was the coolest..!

And with that, may the bird of paradise fly up your nose!