I'm on a mission to make use of what has been sitting around in the pantry. The first step was to take a bit of time to take everything out of the pantry and compile similar items and put them back in an organized manner. I had four, yes four, open bags of barley. Who's in charge of that room? It is clearly not efficient to have multiple packages of stuff, especially opened. But I'm on the road to pantry recovery.

So last night, I cooked up the endings of  a package of barley and a package of spelt. I had no actual mission for them other than knowing if they were cooked and handy, I would do something with them. That all came to light this morning with a super-fast (fastest ever) lunch throw together. 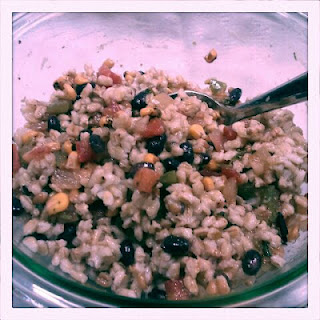 What resulted, is a Fiesta Barley Salad. I'm going to lie to you and tell you that I put avocado in it, because if you make this salad, it would be a spectacular addition. I had no avocados on hand so my salad has none, but I will be dreaming that it does.

This is a no recipe-recipe. All you have to do is cook up some barley according to the directions* and refrigerate until chilled. Toss the desired amount of barley with enough fresh black bean and corn salsa (from the deli isle at the grocery store) to make the mixture look salad like. Then toss in some cubed avocado. If you happen to have grilled steak or chicken handy, chop that and throw in as well. This salad makes a super easy lunch on the fly or would be a fantastic side to a grilled flank steak.

Mmmm flank steak, I will be thinking about that all day. Not many things make me as happy as flank steak. The best flank steak requires a lot of simplicity, the less is more theory. I vow to tell you my flank steak must-knows in the near future. Until then, organize your pantry and cook up something that's hanging around and have it ready in the fridge. Hopefully it forms a new habit for both of us!

*Combine 1 cup barley with 3 cups water in a large saucepan; bring to a boil. Reduce heat to low; cover and simmer for 1 hour. I cooked 1 cup barley and 1/2 cup spelt in 5 cups salted water.. And then when it was cooked, placed in the refrigerator so it is convenient to have on hand this week.