I have a whole new cookbook crush right now.. And because I've been preparing page after page of recipes, Troy doesn't seem to be one bit jealous. 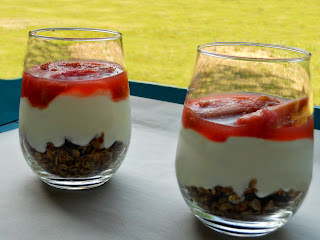 My new favorite book right now is Olivia Newton-John's Livwise. It's beautiful, fresh and just plain wonderful. Last weekend, I prepared one of her muesli recipes and I have it on hand in jars in the pantry. A small bowl topped with some almond or coconut milk makes a lovely breakfast.

For our Sunday breakfast, which we enjoyed while sitting out on the porch enjoying the light summery morning breeze, I layered the muesli with French vanilla yogurt and poached rhubarb, a recipe from her book. It was crazy good!

Also, I learned that there are two kinds of parfait eaters. Those who dip the spoon down through the layers ever-so daintily to get a bit of each layer on the spoon, keeping all original integrity. And then there are those, who's spoon swiftly manifests into a hand-held immersion blender and in two seconds flat, each decadent layer is whirled into a mass of stuff in a glass. I'll let you guess which of us belongs to each style..

I don't want to give away all of the books secrets, so you'll either have to check it out for the muesli recipe or you can use Maple Granola. My version of the poached rhubarb is a bit different as I had to make changes as to what I had on hand. But it is adapted from her version.

If the rhubarb stalks are wide, cut lengthwise into halves or thirds, then cut into 2-inch pieces. Transfer to a large saucepan and add the cinnamon, water, juice and honey. Bring to a boil; reduce heat and simmer, uncovered, for about 5 minutes or until tender, but still holding shape. Remove from the heat and cool. Store in the refrigerator.