The day is arriving that little Lottie is moving to a classroom of older kids. The teachers that she's had throughout her young days have had such a marvelous impact on her and she loves them so much, that I thought it would be nice to make them a farewell gift from her as she moves all the way across the hallway. 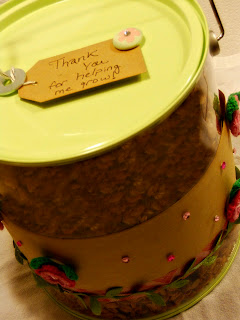 First, I assembled this cute little "paint" bucket. All supplies were found at Joann's; the decor items are by Martha Stewart, I knew there was a reason that I love that lady so much. Just a little bit of hot glue and assembly was done.

To fill the bucket, I baked my cousin Pam's lovely granola. It's nutty and comforting and everything that granola should be. And nothing says I'll miss you like a bucket of granola.

In a very large bowl, combine the oats, pecans and seeds. Place the honey, oil, brown sugar, cinnamon and salt in a small saucepan. Cook and stir over medium heat until sugar is dissolved. Remove from the heat and stir in vanilla. Pour over oats and toss to coat.

Transfer to two parchment paper-lined sheet pans. Bake at 300° for 35 minutes or until lightly browned, stirring twice. Sprinkle with raisins and let cool. Store in an airtight container.