For ever now, I have been wanting to make a pot of Split Pea Soup, it's one of my favorites. Well, I finally got that accomplished. And why haven't I been making it all winter, I asked myself. Or soup in general. It was so easy and the leftovers made packing lunch easy peasy.. And Monday night, I also made a pot of chili, so all week we had either soup or chili to choose from - yummalicious! And then because my new breakfast smoothie recipe is also so fantastic, I'll share that with you too! 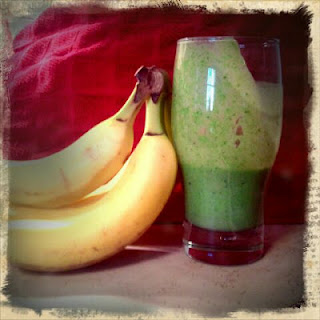 In a Dutch oven, saute the onion, potato and carrots in oil until tender, add a bit more oil if pan seems dry. Stir in broth and water. Rinse peas and add to the soup. Add the ham hock, bay leaves and parsley. Season with a good pinch of thyme and salt and pepper to taste.

Bring to a boil. Reduce heat and simmer, partially covered, for 1 hour or until peas are tender. Cool slightly and remove ham hock and bay leaves. Remove any meat from the hock and stir back into the soup. Serve with baguette slices and butter.

Place all ingredients in a blender and process until smooth. If you like, you could blend with ice as well. I found the coconut milk in the dairy case by the almond and soy milk. It's very delicious (it's a more drinkable version than canned coconut milk). I love coconut, so I had to try it.. I've also tried almond milk, but I was not a fan of the texture or the fact that it didn't taste like almonds.. But this, looks just like milk and tastes like coconut - perfect!