I started to make up a batch of waffles and by the time I was done, this is what we ended up with. With a double dose of apples and a dash of cinnamon, they are a lovely comfort on a chilly morning. 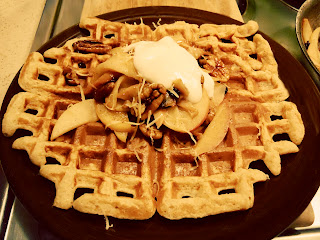 In a large bowl, combine the first six ingredients. In another bowl, whisk the milk, egg yolks, applesauce, butter and vanilla. Stir into dry ingredients just until moistened. Fold in egg whites. Cook on a waffle iron.

While waffles are cooking, melt butter in a large skillet. Add the apples, cinnamon and salt and cook until tender, stirring occasionally. Add pecans and currants and continue to heat until pecans are toasted. Serve with waffles and top with syrup, cheese and yogurt as you like.

This made seven sets of waffles and enough topping to serve four. I separated the remaining waffles and packed them up to make packing breakfast for Lottie easy this week. Sandwiched with almond butter, they would also make a great breakfast on the go. Or you could sandwich with sliced Gouda, Canadian bacon and apple slices for a spectacular grilled sandwich.

As usual, I didn't have buttermilk so I added a good splash of lemon juice to the milk. We were towards the end of the milk, so I stretched it out by using a can of evaporated milk plus enough milk to equal 2-2/3 cups and that way I won't have to go to the store today. And that, I appreciate.