Our household is beginning this week on a mission! Preparing for our week began Sunday evening with a trip to the grocery store gathering staples for the week. Upon returning home, prep work for Monday's meals began.. All with the hopes of sneaking in some time at the gym in the evening then gathering up the kid and settling in at home to a warm awaiting meal and some good ol' family time. A whole fuss-free day and preparing for it was hardly even fussy in itself. 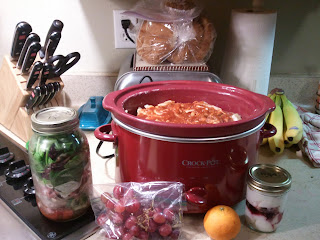 My darling husband assembled Monday's dinner into the slow cooker, which when finished, the crock was placed in the refrigerator until we were ready to step foot out of the door in the morning and then plug in. While he worked on that, I compiled breakfasts and lunches for the family. Note: preparing this meal is husband friendly as there is a bottle of beer to finish while doing so.

As you can see, the grown-ups received a Mason Jar Salad (with roast beef, shaved Parmesan and maple vinaigrette), grapes and a clementine all bunched together in the refrigerator waiting to be gathered up in the morning. For breakfast, we had Mason Jar Parfaits. Have I yet proclaimed my love for mason jars?

For the parfaits which were super simple, I spooned some plain yogurt (I used Mountain High as I find it to be so much more delicious than it's other plain yogurt counterparts, except for Stoneyfield which is also wonderful) into half-pint jars, sprinkled with some cinnamon, topped with a layer of frozen pitted sweet cherries, spooned in another layer of yogurt, a dash of cinnamon and topped with sliced almonds. To keep the crispness of the almonds, it would be best to add the morning of, but I'm willing to make a trade-off...

Lottie also received a berry yogurt parfait and a bento box. Lastly, with the magic of pre-programmed coffee the morning shuffle seemed to have been conquered by little fairy maids.

Cut brisket into four pieces and dredge in flour (reserve any remaining flour). Place half of the onions into a 4-qt. slow cooker and top with beef. Sprinkle with reserved flour, pepper and salt. Add remaining onion.

Combine the chili sauce, beer, brown sugar, horseradish and garlic; pour over top. Cover and cook on low for 8-12 hours or until meat is tender. 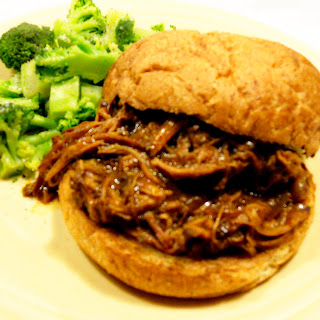