My super cool brother-in-law (actually, I have three of them in total) requested a Coconut Cream Pie for Thanksgiving. I was in a delightful mood (which is typical) and he asked so nicely, so I replied - you becha! Then Thanksgiving suddenly arrived and I never baked the pie... Thinking surely he'd forget and besides, who can be that sad when there are a bazillion other slices of pie available - I shelved the promise I made about the pie. Turns out he didn't forget about the pie that he had been anxiously counting down the days for and he cried. Well, almost cried.

In an effort to remain the coolest sister-in-law ever (which isn't hard since I'm his only one), at noon on Thanksgiving Day, I whipped up a Coconut Cream Pie. Well, to properly share credit - my mom joined in on the effort and whipped up the pastry for me. Together, we saved Thanksgiving! 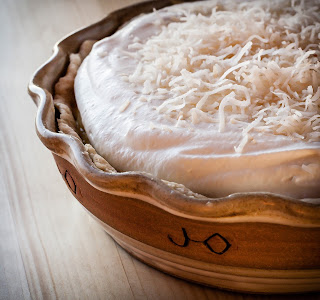 Line a 9-in. pie plate with pastry and flute edges. Blind-bake according to recipe directions. Place on a rack to cool completely.

In a small bowl, whisk the egg yolks, sugar, flour and salt until blended. Set aside. In a large saucepan, heat milk and half-and-half over medium-high heat until mixture almost simmers (do not boil), stirring occasionally. Stir in coconut then remove pan from the heat.

Let filling cool for 15 minutes. Pour into pie shell. Place a piece of plastic wrap directly over the filling and refrigerate for at least 4 hours.

For topping, place the cream and vanilla in a large bowl. Beat on medium speed until frothy. Gradually add sugar while beating at medium-high speed; beat until mixture reaches stiff peaks. Spread over pie and garnish as desired with additional coconut. Refrigerate until serving.