We just returned from a wonderful trip to Norway where days were spent gathered with family - sometimes around the table, sometimes alongside the sea and during the other times, exploring the beauty of the fjords.

Our days began with bread and an assortment of Norwegian cheeses that are different than any other. The cornerstone of these cheeses is brunost. A staple in Norway made by caramelizing the milk sugars of whey, brunost is a brown cheese with a savory indescribable flavor with a slight caramel finish. Sliced thinly with a cheese knife, it is often served on bread and is a definite must-try if you ever find yourself in Norway. Whether or not you'll love it however, that I cannot predict.

Perhaps one of my favorite aspects of Norway is that coffee seems to be on all day, every day. The crisp Norwegian air, the sound of rippling waters, and the smells of fresh sea water intertwined with a hot cup of brew makes for nothing but a mild smile of all in the world being as it should be. 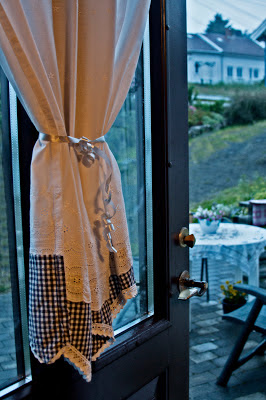 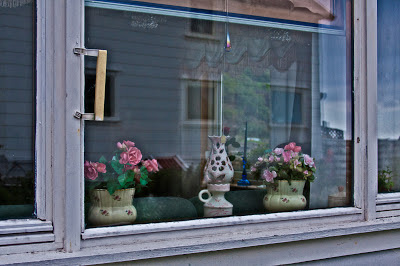 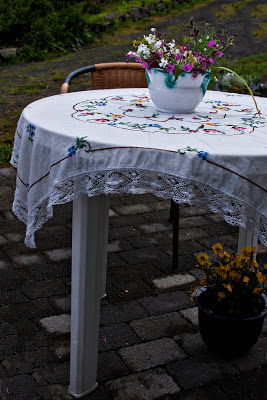 The first night that we arrived in Sokndal, dinner was followed by rhubarb sauce. Old-fashioned and traditional - this moment in Norway was set to be my favorite. Until the container of cream was passed around the table. Perhaps my two favorite things in the culinary world are rhubarb and cream. How had I not known to combine the two? This moment was not set to be just my favorite but perhaps my forever-the-best moment. Ja ja.

Excited to share my recipe for rhubarb sauce, I discovered that I do not have it with me here in Poland. However, my wonderful grandma was able to come to the rescue with her non-recipe. So grab some rhubarb, a cup of coffee and top off your day with a little cream.

From my grandma - You may use either fresh or frozen rhubarb (I used to freeze tons of it when we had so much there on Three-Bars Drive). Simply cut the rhubarb into whatever size pieces you'd like and place in a saucepan with a pinch of salt and a small amount of water; cover and cook. (Rhubarb has enough moisture of its own so a small amount of water is all that's needed.) Heat and time depend entirely on how much rhubarb you are cooking and how long you want to spend waiting for it to get fully cooked - it cooks rather quickly - just watch so it doesn't scorch if you are hurrying it.

When it's thoroughly cooked, rhubarb will actually break up and be 'sauce-y'.  Add sugar and vanilla to taste. You may do this right away or wait until it cools somewhat. Voila!! Rhubarb Sauce!!

To serve Norway-style, spoon into bowls, top with cream and sprinkle with another little spoonful of sugar.